Dude and I ended up taking a taxi to school because we both had a couple of bags to drag with us.  Taking those on the train was not a fun prospect.  Especially in the morning. The trains tend to be pretty crowded (of course), especially on the Kwan Tong Line.  So we went to wait for a taxi at the taxi stand.  Stations generally have two stands.  One is for urban taxis.

The urban taxis can go anywhere really.  They are mainly focused on the Island and Kowloon side of Hong Kong.  They can go to the airport and Disneyland on Lantau Island, but they are not allowed on much of the rest of the island.

Then there are the green taxis.

The green taxis are limited mainly to the rural parts of Hong Kong.  Surprisingly, there are MANY rural parts to Hong Kong.  These can also go to the Airport and Disneyland on Lantau, but they are much more limited in their movement around Hong Kong.   They are also cheaper.

There are also blue taxis.

So Dude and I were in line for the urban taxis to go to Ma On Shan (in the New Territories) by ways of Kowloon.  We do have the choice of taking the green taxis because they can go up through Sai Kung to get to Ma On Shan.  We waited about 10 minutes in the urban line.  We weren’t really getting anywhere.  There was no one in the NT lines.  I told Dude we were probably going to have to go by green taxi.  He wasn’t thrilled about it though because he tends to get motion sick going through Sai Kung because it involves going over mountains instead of through them.  It is a lot of curvy and windy roads.  Unfortunately, we were running out of time.  We were able to get a taxi pretty quickly.

Dude seemed pretty excited about going on camp.  He was going to be on the camp with most of his friends.  He was a little peeved that I was on the opposite camp from him.  He thought it was only common sense to let him be on camp with his mother.  I told him it wouldn’t be fair since no one else would have their parent on camp.  He still didn’t see the issue.  He should have his mom.  LOL.  What a dork. 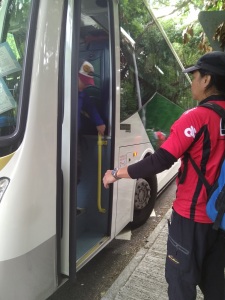 We loaded our buses and headed out to our camp.  Many of the parents were there to see their little darlings off on their trip.  So much so, they followed us to the buses and waved as we left.  To me?  This was overkill.  We were staying in Hong Kong.  They could get to their kids in half an hour if they were so inclined.  It’s not like they were going overseas.  IF that were the case, I could see the theatrics.  It wasn’t though.

So our camp was on the Island on the Eastern side of the Island.  It was actually closer to our place in Tseung Kwan O.  It was almost just across the harbor from us.  From what I am told from other teachers, this is a place for people with quite a bit of money.  Well, near where we were going.  WE were going to stay at a scouts camp.  Hardly 5 star accommodations.

We got the kids unloaded from the bus and into the camp.  The number one question being asked are regarding rooming.  They were very concerned about who they would be rooming with.  I ended up devising a rooming plan for both camps.  It was mostly based on the teams, but at least we had a plan.  It was funny that that was their main concern.  I was more hungry, but that was because I hadn’t eaten yet. 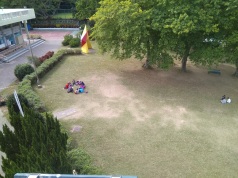 The kids were put into a large group where the facilitators introduced themselves and then split them off into groups.  I ended up taking a look around the camp. 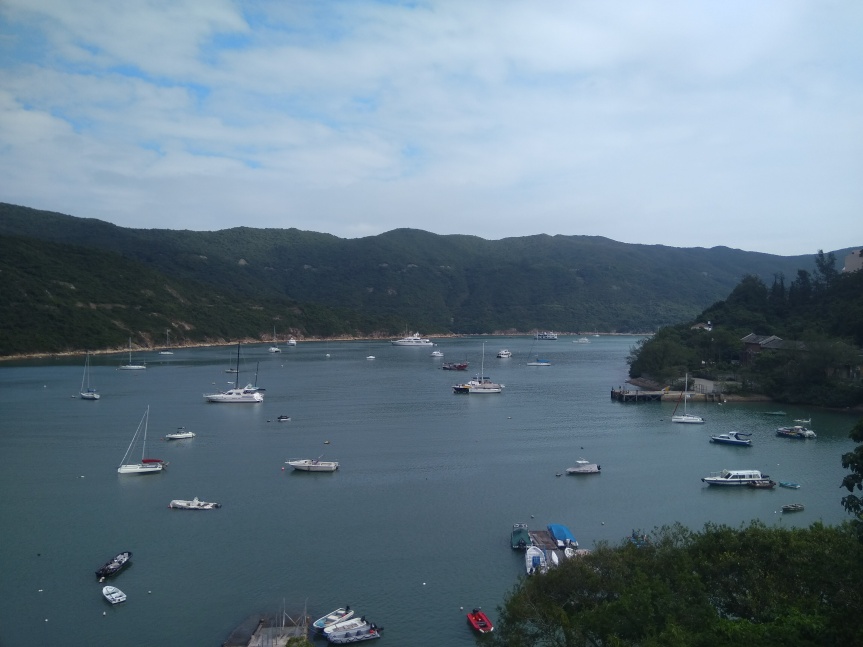 The facilitators took their groups and worked on different team building exercises.

The kids worked together to create a piece of art using materials in nature.  Quite a few of them were really creative with this.  I walked around with another teacher to see what they were doing, but we decided to take a walk to the water.  We had to go out of the kayaking gate to get there. 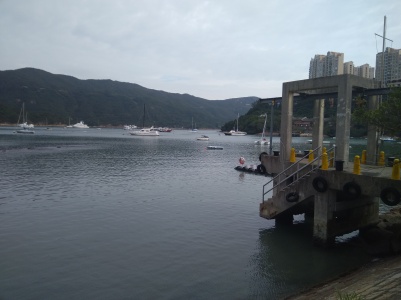 The water was gorgeous.  That’s for sure.  I thought it was a bit cold for the kids to be going on and kayaking.  It was 16 C.  I think that’s the 60s in F.  But yeah, they were still going to be out there the next day.

When we returned, there were working on the tents.  We were only supposed to have 6 tents for the girls and 5 tents for the boys.  We ended up with twice as many.  They ended up taking down a ton of them.

I ended up staying in the tents for the first night.  I’m not a fan of camping at all really, but I guess I was interested in at least having the experience.  One of the other teachers lectured the students about the girls and the boys staying separate.  He put a few sticks down the middle as a “wall”. 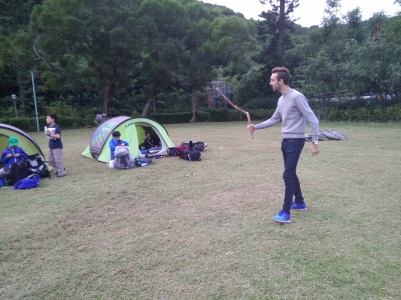 The kids thought this was quite entertaining.  I’m not going to lie, so did I.  I think I was laughing hysterically by the end of the rant.

I was sent a couple photos of Dude on the other camp.  He seemed to be having fun. 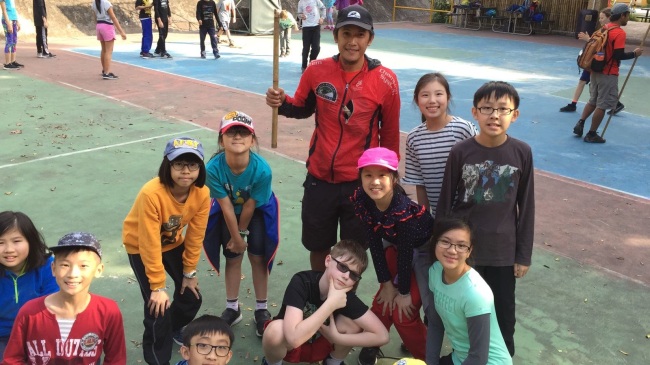 The reports from the teachers was that he was behaving really well and was the life of the party.  I knew he would have a good time.  I wish he would just give everything a chance before going straight to the negatives……. 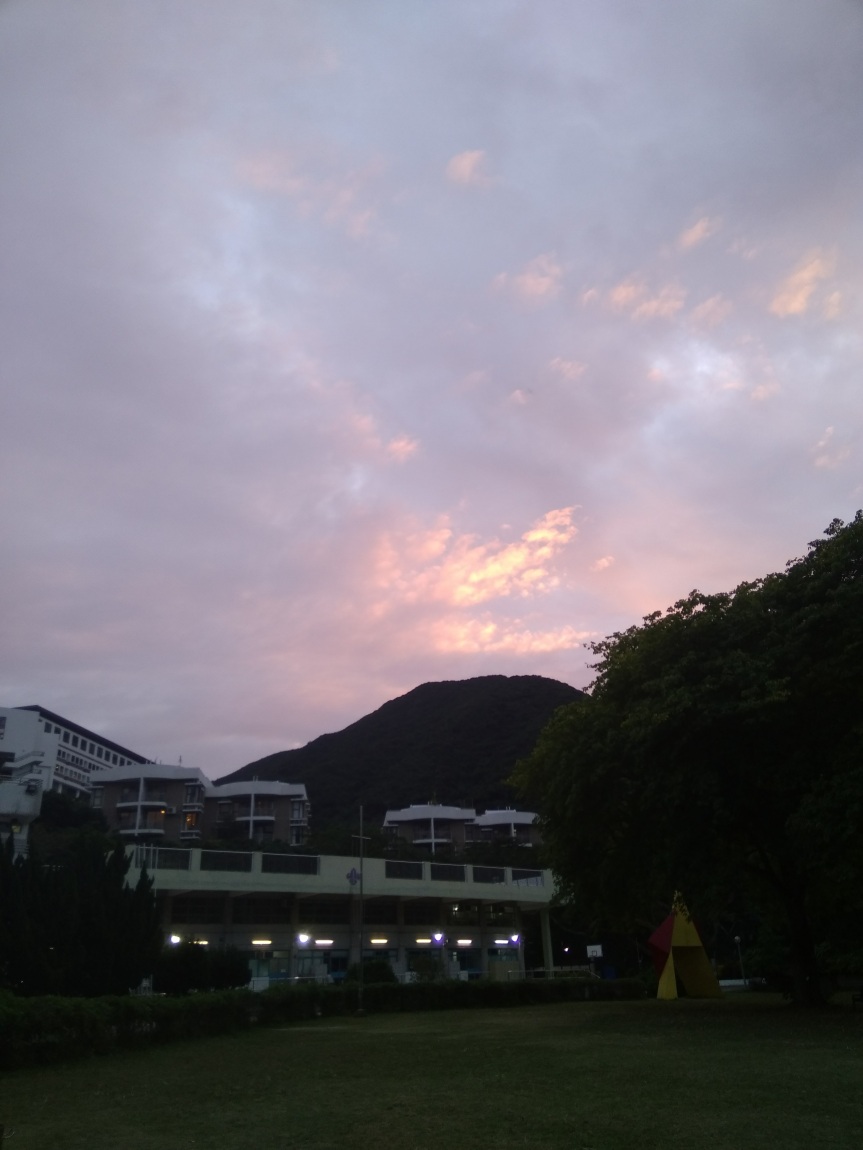