Welcoming Our New Addition to Our Home….

We ordered the couch and some shelves last weekend in a moment of stupidity where we thought going to Ikea on the weekend was a good idea.
Between Love’s trouble dealing with the heat and my impatience at the hordes of people swarming every bit of furniture in the showroom, it was not pretty.  At all.  Not only did we go on a weekend, but we brought all three kids.
Yeah.  It was stupid.
You may ask what we should have done with them?  Not sure.  Monkey is old enough to take care of them while we took care of this.  In fact, that is probably what we should have done.
No.  We decided we needed to go out “as a family”.  Bwah ha ha ha!!!

So anyway, we did not find the couch we wanted on the showroom floor.  Love found it on his cell phone, and I went to order it.  He had wanted to order the furniture and then take a GoGoVan (a service provided here since most people don’t own a car).  I was against the idea because, you know, money.
We would have had to have a van big enough to take everything we bought along with the 5 of us.  While it has been a life saver for us in a few situations, that would have cost more than having it delivered.
I went up to order the furniture.  In the moment they asked pick up or delivery, I caved.  I said pick up.  Well, it turns out even though looking online showed everything in stock where we were, we would have to go to Kowloon to get our furniture to pick it up.  Eff that (excuse my language).  I chose delivery.  I was NOT going to schlep 3 kids and a pissy husband to Kowloon Bay to GoGoVan it all the way home with the added costs of the tunnels (the tunnel under the harbor has a toll as down the tunnels through the mountains). 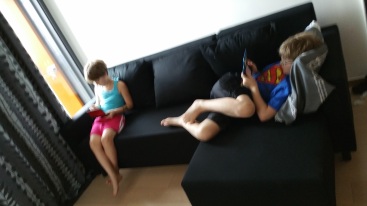 I returned to Love with the news.  He was upset until he realized we would have to take a number of trains/buses to get there to pick up something we knew was listed as there.
So we took our 4 day delivery and went home.
Friday, the couch (and shelves) were delivered.
We put the couch together Saturday.  I am now thrilled to say, we have a couch!!!